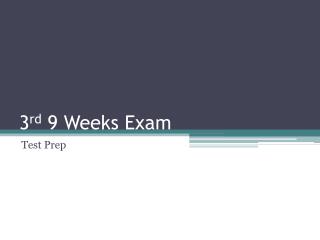 Marketing and Promotion of Video Games LO- to discuss the exam topic for June 2014 - . promotion and marketing?. exam

Final Exam Review - . what is a mixed economy? has both market and command economies what are the natives of australia

1st Six Weeks Exam Review - . which of the following regions typically receives the most precipitation and has the

9 Weeks Exam Review Game - . 1. the first review on the harry potter movie was favorable . many people attended and

Exam Review - . exam 4 momentum second 6-weeks, test 1. question #1. why can rocket can fly into space, when there is no

AP US History: Secrets of the AP Exam - . or—what you need to know to get through the next 32 weeks and pass the exam.

Review for 1 st 9 weeks EXAM/Benchmark - . are you prepared?. in june 2001, the intel corporation announced that they