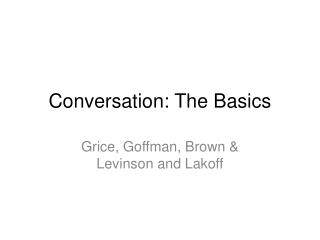 Conversation: The Basics. Grice, Goffman , Brown & Levinson and Lakoff. The Maxims. Grice’s Maxims - or his ‘Co -operative Principle’. Quality Quantity Manner Relevance. Conversation works only with the co-operation of its participants. Men and Women in Conversation - . presented by: monica thorpe and cassie fredendall. 2 may 2007. objectives. to determine

In Conversation with Richards… - . ts english / fall 2013. course goals. conversation: to use research and analysis

CONVERSATION SKILLS - . what is conversation?. communication by two or more people, or sometimes with one’s self, on a

Session 2 - . language stimulation &amp; support strategies. have a conversation. pay attention to how both partners

The Conversation between JESUS and a LAWYER - . luke 10:25 on one occasion an expert in the law stood up to test jesus.

DUA - . dua is conversation with allah … it is the most uplifting, liberating, empowering, and transforming

Conversation Theory - Gordon Pask - . cybernetics = where he conceived human-machine interaction as a form of

“Can you pass the salt?” - . as english language. why conversation works according to theorists… grice, goffman,