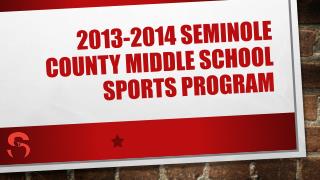 McLoughlin Middle School 2013-2014 - . welcome to 8 th grade! i’m looking forward to getting to know you and having a

Patrick County Middle School Athletics - . the best question-why?. reclassification- the bar has been raised for our

HOUSTON COUNTY MIDDLE SCHOOL - . title i. again this year houston county middle school will be a school wide title i