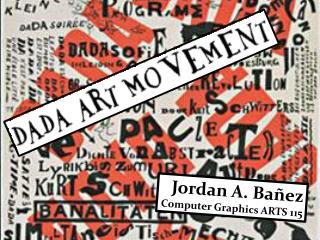 Jordan A. Bañez Computer Graphics ARTS 115. The Birth of Dadaism. Because of the war, many artists, intellectuals and writers, especially those from France and Germany, moved to Switzerland.

Higher / Intermediate 2 Computer – Systems - . mr climie part 1. data representation. what you will learn here is how a