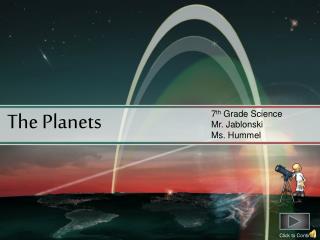 Lets Learn About The Planets!! - . what all do i know about the planets?. think about these questions through out this

THE PLANETS - . goal: to learn (review?) basic information about the 8 planets and the minor planets of our solar system.

THE PLANETS! - . 4 th period si. mercury: the closest planet. katie shen. mercury information. mercury is one of the

THE planets - By micah segura-mitchell. the planets. named after the roman “king of gods”. interesting facts about

Compare the planets in our Solar System! - . compare our planets to the sun!. compare our star (the sun) to other nearby

The Planets in Our Solar System - . by the end of this lesson: students will be able to name the eight planets in order

Gustav Holst and The Planets suite - . by justin castleton. the life and times…. born september 21 st , 1874 died may

The Planets - . and what t hey are/mean. mercury. mercury is the roman messenger god(hermes is greek.) the planet

The Planets SuitE by Gustav Holst - . motif: a musical idea or succession of notes that is characteristic of a

The Planets - . adam caughhorn mary felton melinda michael. the solar system. the sun is a star. there are 8 planets.

The Planets - . what is a planet?. a planet is a celestial body that orbits around the sun what does celestial mean?

The Outer Planets - . astronomy 1. weekly quiz. in place of a quiz this week, you must be able to identify each inner