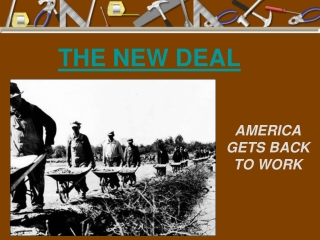 THE NEW DEAL. AMERICA GETS BACK TO WORK. SECTION 1: A NEW DEAL FIGHTS THE DEPRESSION. The 1932 presidential election showed that Americans were clearly ready for a change Republicans re-nominated Hoover despite his low approval rating The Democrats nominated Franklin Delano Roosevelt. Texas and The New Deal - . the new deal. president franklin d. roosevelt had promised a “new deal for the american

THE NEW DEAL - . analyze the responses of franklin roosevelt’s administration to the problems of the great depression.

The New deal - . franklin d. roosevelt. democrat – elected 1932 “i pledge you, i pledge myself, to a new deal for the

THE NEW DEAL - . america gets back to work. topic: a new deal fights the depression learning objectives: a new deal

Making Sense of the New Deal - . an educational accompaniment of chapter 33. table of contents. timeline of the new deal

RAP: New Deal Goals - . using your lists of new deals, place each new deal in one of the three goal areas: relief,