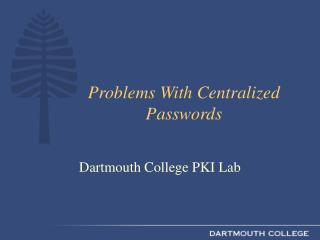 Problems With Centralized Passwords. Dartmouth College PKI Lab. Users HATE username/passwords Too many for them to manage: Re-use same password Use weak (easy to remember) passwords Rely on “remember my password” crutches Passwords - . good strong passwords are key to keeping your access and data safe. passwords. the key to password

PASSWORDS - . so, how do i make a strong

Resetting Passwords - . applicants who set up accounts for the cohort two competition who are re-applying will use the

Strong Passwords - . how to make your passwords work for you…. linda a. leblanc it security support is&amp;t. once

PROBLEMS WITH - . foreign powers. mr hayner. http://www.shippaintings.com/age_of_sail.htm. 1. england did not want the