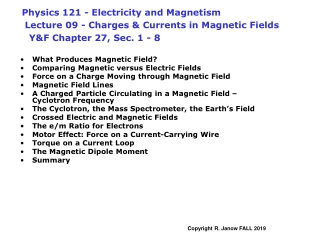 Magnetic Fields - . a vector quantity symbolized by direction is given by the direction a north pole of a compass needle

Magnetic Field Patterns - . a quick review of magnetic fields. http://www.youtube.com/watch?v= uj0dfdfqajw. when an

Circuits to Optics - . june 16, 2004. which type of field is present near a moving electric charge? (a) an electric

Topic 6: Fields and forces 6.3 Magnetic force and field - . 6.3.1 state that moving charges give rise to magnetic