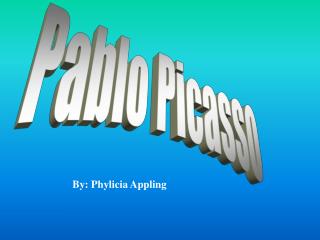 Pablo Picasso. By: Phylicia Appling. Early Years. Pablo Picasso was born on October 25, 1881 in Malaga, Spain. He started painting and drawing at a very young age Picasso’s father José Ruiz y Blasco was also a painter himself and recognized Pablo’s talent at his young age. Pablo Picasso - . pablo picasso was one of the greatest artist of the 20 th century. he was born in malaga spain in 1881

Pablo picasso - . by: abdulrahman al-mana 7a. who is