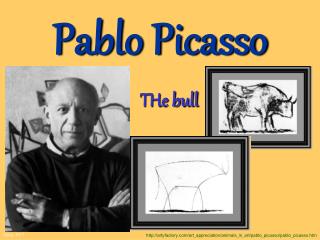 Pablo Picasso THe bull Sleep, 1937 http://artyfactory.com/art_appreciation/animals_in_art/pablo_picasso/pablo_picasso.htm Pablo Picasso October 25, 1881 – April 8, 1973 Many consider Picasso to be the greatest artist of the 20th century.

Pablo Picasso - . girl with boat. three musicians. woman reading. woman in an armchair. these are not cubist works of

THE HIDDEN SHAPES IN PICASSO’S ARTWORK - . a webquest integrating art along with geometric and organic shapes. yezebel

Pablo Picasso - . 1881-1973. informaci ón general. pablo ruiz picasso was a spanish painter and sculptor. he is one of

Pablo Picasso - . the best known artist of our times. pablo picasso (1881-1973). growing up picasso. picasso was born on

Pablo Picasso - . “i am always doing that which i can not do, in order that i may learn how to do it.” “every