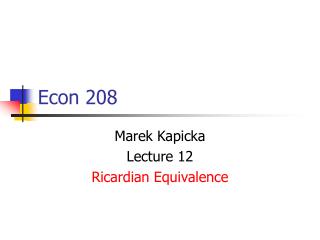 Econ 208. Marek Kapicka Lecture 12 Ricardian Equivalence. Psets and Reading. Read “The Mythology of deficits” by Landsburg and Feinstone (on the web) Read chapter 14 for this week PS 4 will be posted today. Where are we?. Introduction: A model with no Government

The Savings Banks Industry in Europe and worldwide The role of ESBG/WSBI - . the european savings banks group (esbg).

Emerging Concepts in the Workup of Polycythemia and Thrombocythemia: JAK2 - . short presentations in emerging concepts

The Community Insurance Fraud Initiative (CIFI) The Use of a Unique Insurance Database A 5 Year Retrospective - . daniel

EOC Goal Review - . civics and econ. goal 1. goal one. what was the 1 st representative government in the 13 colonies ?