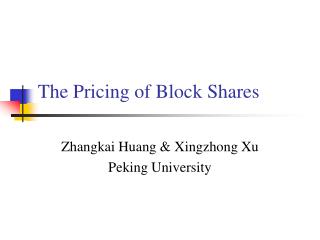 The Pricing of Block Shares

The Pricing of Block Shares. Zhangkai Huang & Xingzhong Xu Peking University. Block shares around the world. La Porta (1999): 76% of listed companies in the developed economy have at least one share block larger than 10% of the total shares. Trading off liquidity against control.

The Pricing of Block Shares

Monopoly Pricing - . by kevin hinde. aims and learning outcomes. explore price discrimination by monopolists and the

Law on Companies - . companies. the trading company provides two important factors which have underpinned the success of

Pricing - . a firm has control over the prices only if it has some market power . pricing decisions are simple in the