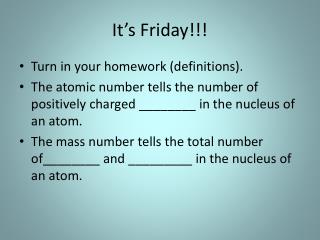 What is Black Friday? Black Friday is the day after thanks giving day. When a lot of things go on sale to try and make

Announcements… - . the end of the quarter is this friday check your grades online turn in any missing assignments quiz

Freezing Friday! - . room 7 looks at ice. on friday mrs murphy brought in some ice. lots of things were frozen in the