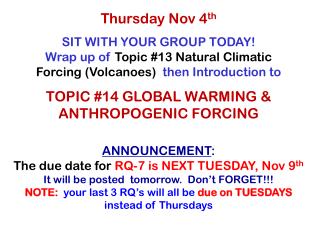 A strobiology - . announcements. homework #4 due on thursday quiz #2 on thursday closed book, closed note, no electronic

Getting to the bottom, fast - . prof. ramin zabih http://cs100r.cs.cornell.edu. administrivia. assignment 4 is due on

Key points for Thursday - . ted mitchell. 1) the web site for this class is http://www.prospectlearning.com/316/ 2) the