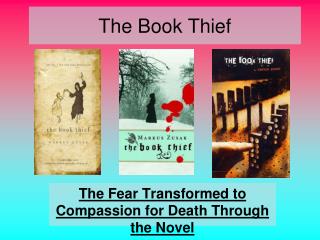 The Book Thief. The Fear Transformed to Compassion for Death Through the Novel. The Book Thief - By Markus Zusak. A majority of civilization see death as the eternal end, creating a worldly fear. Through the novel, that fear is transformed into compassion through the use of: Diction

Life Science Chapter 4 - . bellwork. discuss a scientific observation you made over the weekend. make a book!. work with

The Book of Revelation - . book of prophecy. keys to unlock the book of revelation. the book was written to be read.

parts of a book - Introduction. spine- is the backbone of the book.illustrator- person who draws the pictures.cover-

MARKUS ZUSAK - . biography. born in australia january 1, 1975 parents are immigrants from austria and germany youngest of