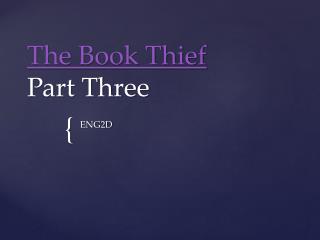 The Book Thief Part Three. ENG2D. The Gravedigger’s Handbook Faust the Dog The Lighthouse The Shoulder Shrug Dictionary ( Ilsa leaves in window) The Whistler The Standover Man The Dream Carrier The Word Shaker The Last Human Stranger. What Books Does Liesel Read?. Practical English, Book II - . unit 6 part a. do animals have a culture? lectured by cheng chunlan. unit 6: part a.

Answering Doctrinal Questions (Part 3) - . stan crowley. but sanctify the lord god in your hearts, and always be ready to