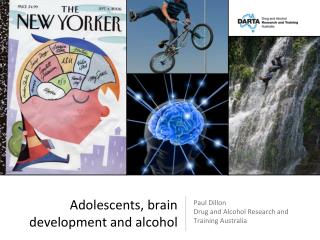 Adolescents, brain development and alcohol. Paul Dillon Drug and Alcohol Research and Training Australia. The brain. We are learning more about the brain all the time … weighs 1300-1400 grams approximately 100 billion neurons and one trillion supporting cells Alcohol and Adolescents - . http:// www.abovetheinfluence.com/speak/videos. pre-quiz. decide if each question is true or

Alcohol, Tobacco and Adolescents - . pre-quiz. decide if each question is true or false. a single drink of alcohol can

Adolescents and alcohol: An ecological perspective - Focusing on symptoms, not causes. political, media focus shifts from

The Teen Brain and Alcohol - . your brain. peaks of brain plasticity. the word “plasticity” is a term used to

Alcohol Use Among Adolescents in Mongolia - . results from a qualitative study and experiences from a peer education

Adolescence and Brain Development - Crime and culpability. at age 17, christopher simmons and his friend, robbed a woman,