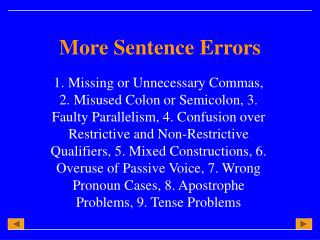 Comma Splices and Run-On Sentences - . comma splice- two or more sentences joined together as one, separated by a comma

Fragments, comma Splices, and Run-ons - . comma splices, run-ons, and fragments are errors in sentence structure, either

Sentence Faults - . the unholy trinity. a sentence is a group of words expressing a complete thought. grade school

COMMON SENTENCE ERRORS - . subject-verb agreement:. the subject of a sentence specifies who or what the sentence is

Sentence Errors &amp; How to Fix Them - . mr. eble cp1 junior english. first of all: a complete sentence…. …has a