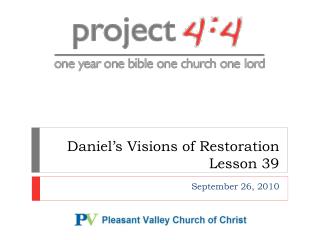 the restoration of god s name - Purpose. to present the possibility that what was done to our native americans (stripping

Lesson 39 Trichotomy Axiom – Negated Inequalities - . for any two real numbers a and b, exactly one of the following is

Lesson 39 - . activity 2.8: visualizing the ending of “the cask of amontillado” lesson goals: visualize in order to

Visions of The Future - . billy bowles , tom rathbun , jacob lewis, levon mikaelian. the class purpose. to learn how to

Daniel Lesson 2 - . daniel in the critic’s den. the veracity and authenticity of the book of daniel has been under

Daily Lesson Visions - . sit with your cma group! ïŠ. take out your daily lesson vision draft from your pre-work

Early Visions of HCI - . hall of fame or shame?. pointcast “personalize channels” dialog. hall of shame, but why??.