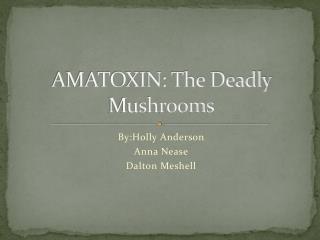 AMATOXIN: The Deadly Mushrooms. By:Holly Anderson Anna Nease Dalton Meshell. What are Amatoxins ?. Of more than 5000 species of mushrooms in the United States, approximately 100 are poisonous, and less than a dozen are deadly. Some of these are classified as amatoxins . All fungi - . make their food. absorb their food. produce mushrooms. have chlorophyll. fungi do not. carry on

Medicinal Mushrooms - . fact, fiction andfolklore. what we know…. today, there are over 270 identified fungal species

THE 7 DEADLY SINS OF CUSTOMER SERVICE - . adopted from the presentation of prof. rene t. domingo of aim at the asian