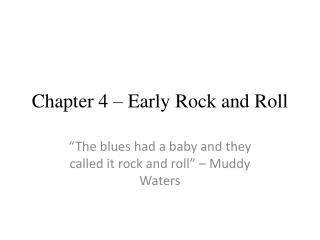 Chapter 4 – Early Rock and Roll. “The blues had a baby and they called it rock and roll” – Muddy Waters. Musicians with Backgrounds in Country Music. Bill Haley (1925-1981) 1951- Bill Haley and the Saddlemen covered blues songs 1952- group name changed to the Comets CHAPTER 10 - . weathering and soil formation. why are river rocks round?. tumbling in running water. what is weathering?.

Starting Out with Java: Early Objects Third Edition - Chapter 7: arrays and the arraylist class. starting out with java:

Early Israelites Chapter 3:ii - . living in canaan alongside the phoenicians and philistines was a tribe known as the

Chapter 9 Remnants of Rock and Ice - . asteroids, comets, and pluto. 9.1 asteroids and meteorites. our goals for learning