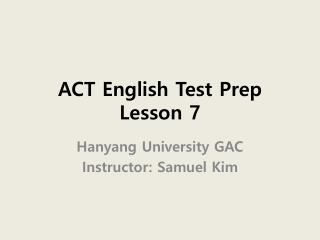 USA Test Prep - . what’s in it for me?. 5 tested areas of the act. english mathematics reading science writing. what to

English 10B Review - . 4 main comma rules (1/4). use a comma when independent clauses are connected with a coordinating

How to Study the Bible Bible Study Series Lesson 7 Reading The Bible as a Love Letter Pg. 27 - . quick review 1. we’ve

SAT Prep - . everything you didn’t want to know about preparing for the test…. the sat sends scores of every testing

Lesson 2 – Proportional Reasoning Outcome: 10 – Preparation Textbook Reference: 1.1 - . this is the icon for

Chapter 3 Test Preparation - . to view the slide show, please click on the link above called “slide show” and click

Lesson 7: Holderness and Swanage Case Study - . lesson objective: to produce a detailed case study on an area of coastal