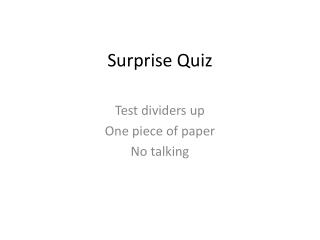 Surprise Quiz. Test dividers up One piece of paper No talking. Review Quiz. When water dissociates what are the two types of ions that you will find? Why is water a thermoregulator ? Oil does not dissolve in water. What is the scientific term for this? How does salt dissociate in water? Surprise Quiz Paradox - . a teacher announces “sometime next week, i am going to give a surprise quiz.” using

Surprise, Surprise, What’s Inside? - . by cindy beasley. what’s inside the box? what could it be? here’s some

SURPRISE QUIZ TO ASSESS BASIC PRO|ENGINEER PROFICIENCY - . instructions and comments: don’t stress : if you have been

Surprise! - . scenario 1. kids birthday coming up?? no idea what to do?? why not use to create a scavenger hunt for the

Surprise - 3. what do you know about jesus' recruitment?. 1-8. name 8 of the 12 apostles christ selected for leadership

Mug ( surprise!) - . mug body will be made from a slab template, you must use the dimensions on the prepared templates.

Surprise #6 - . dozens of human genes may be the result of horizontal transfer from bacteria. a typical page of the human

Sarah’s Surprise - . sarah’s surprise. sara is on the way to school and she sees a cute brown labrador retriever.

Shyla’s Surprise - . a wn productions . all shyla ever dreamed about was a birthday party . every year when it came to

Opening Surprise - . usually rely on a good storyteller to come up with a surprise ending author of ruth doesn’t

“Snow Surprise” - . bulged. if a container bulged , its sides stuck out as if it were going to burst. bulged. when

The Surprise - . commitment is driven by giving not receiving. gratitude. “ donating myself helps me to see that