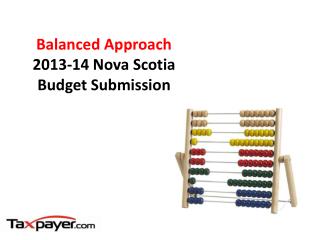 Balanced Approach 2013-14 Nova Scotia Budget Submission. We are: Non-profit, Non-partisan We Stand For: Lower Taxes Less Waste More Accountability What We Do: Direct advocacy with politicians Educate/mobilize supporters . At a Glance…. Nova Scotia - . i am canadian. by dustin. where. nova scotia is a canadian province. it is located at 76 longitude and 40

Nova Scotia - . a presentation about cape breton note: all pictures, facts and figures are not mine and are found on the

Annual Conference May 14-17, 2013 Halifax, Nova Scotia - Getting off the horns of a dilemma before you hurt yourself or

Annual Conference May 14-17, 2013 Halifax, Nova Scotia - When are counsellors at risk of ethical misconduct? dr.

Literacy Nova Scotia - Although the individual with a learning disability has an average or above-average iq, the

Lacrosse Nova Scotia - . strategic planning 2008 and beyond. the plan. the lnss executive met with blaise landry from