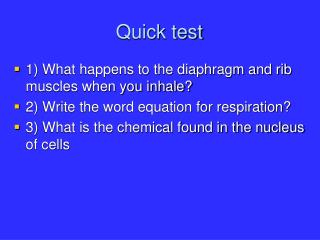 Quick test. 1) What happens to the diaphragm and rib muscles when you inhale? 2) Write the word equation for respiration? 3) What is the chemical found in the nucleus of cells. Objectives. 1) To see the diseases caused by smoking RES 131 - . pulmonary functions. good start of test. start of test must be quick and forceful no excessive hesitation

RM Quick Reminder Test - . q1: what is it called when ppts take part in either the experimental condition, or the control