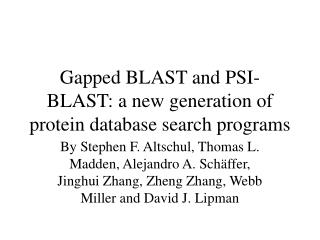 Massive explosion in China - Huge explosions hit an industrial area in the port city of tianjin, triggering a blast wave

Designed by Jennifer Yong teaching@jenniferyong - .com please send her your thanks if you appreciate this!. blast 2pts

Resource Database Assembly: The Next Generation - . part one. how we got here. 2013 airs conference sessions in portland