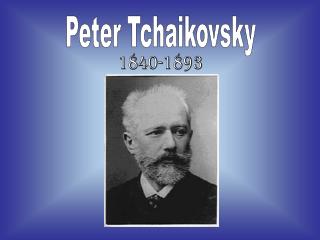 Peter Ilyich Tchaikovsky - . peter was born in votkinsk, russia. he became a lawyer at the age of 19. he began the study

Wagner and Tchaikovsky - . richard wagner 1813-1883. born in leipzig. his father died when he was an infant. his

PIOTR ILYICH TCHAIKOVSKY - . a biography of a great composer and history composition of piano concerto no. 1. family.