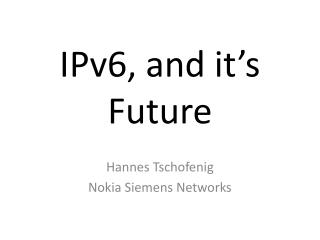 IPv6, and it ’s Future. Hannes Tschofenig Nokia Siemens Networks. Status. Standardization on IPv6 began a long time ago (around ‘ 91/ ’ 92). Benefit from IPv6 is the larger address space But: “ IPv6 deployment is like the Y2K project - without a predefined deadline ”

Next Generation IP Protocol: IPv6 - . nete0514 presented by dr.apichan kanjanavapastit. why ipv6?. ipv4 has some

IPv6 Security - 110 long module on security. ipv6 security. copy … rights. this slide set is the ownership of the 6diss