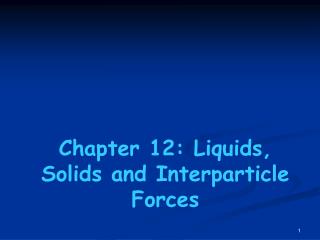 Chapter 12: Liquids, Solids and Interparticle Forces. What is a liquid? A solid?. Properties of liquids and solids depend on Interparticle (Intermolecular) forces: - vaporization/condensation/freezing - equilibrium vapor pressure/volatility - surface tension Particle model of solids, liquids and gases - . visit www.worldofteaching.com for 100’s of free powerpoints. how do

Clicker Questions Chapters 13, 14, 15 - . dana and michelle chatellier university of delaware. the rule of “like

States of Matter - . solids, liquids, gases, plasma, and phase changes. is there any movement within the structure of a