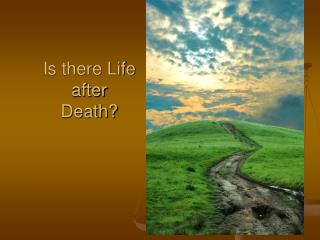 Dying and Death - Chapter 23. dying and death. why is there death?. there is no completely satisfying answer to the

Siddhartha Factoids - Although hinduism is the older religion, buddhism shares many of the same elements and seems to

A MATTER OF LIFE AND DEATH - . romans 8:13. for if you live according to the flesh you will die, but if by the spirit you

From Death to Resurrection - . whatever awaits us after death, it is not an endless continuation of our temporal

A. After Life for the Righteous: What? - . heaven is not the end of the world life before death: what ? life after death:

A Matter of Life and Death - . can the famous really postpone death? the distribution of death dates across the year

Mythology - . the death motif by chandra &amp; sheena. theme. in each death story there are many different

LIFE AFTER DEATH - . reading around this topic. you should aim to study at least two of the following introductory

Determining death - . why pertain to the 21 st century ?. by - sp. importance of determine death ?. pronounce a

Life After Death - . -some idea about death-. what happens to one after death?. two kind of beliefs. materialism