A Matter of Life and Death - PowerPoint PPT Presentation 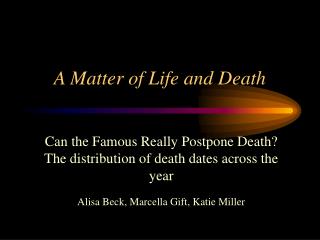 A Matter of Life and Death

A Matter of Life and Death. Can the Famous Really Postpone Death? The distribution of death dates across the year Alisa Beck, Marcella Gift, Katie Miller. Basis for Project. Case Study 6.3.2 David Phillips’ study on postponing death until after one’s birthday Theory of death dip/death rise.

A Matter of Life and Death

Life After Death - Is there a life after death? with the help of cryogenics and advanced technologies, scientific

“The tongue has the power of life and death, and those who love it will eat its fruit.” - “with the tongue we

A Matter of Life and Death - . can the famous really postpone death? the distribution of death dates across the year

Human tissue: the matter of life and death - . james underwood emeritus professor of pathology, the university of

The Need For effective Communication…….. A matter of life or death - . part 1. content narrator :a caveman walks into

A Matter of Life or Death - . “death and life are in the power of the tongue: and they that love it shall eat the fruit

Birth , Life and Death of a Star - . learning objective: to learn about the life cycle of a star. learning outcomes: all:

Stars: Birth, Life and Death - . there are 3 types of stars that you need to be familiar with... low mass stars

LOVE AND DEATH - . joe wyatt and michael clachers. infatuation and ‘courtly love’. what romeo experiences at the

Belief in life after death - . the day of accounting . akhira. the arabic word for afterlife, akhira , bears the meanings

Death - . and the afterlife. what the materialist believes. only the body exists (no soul) we are the body when the body