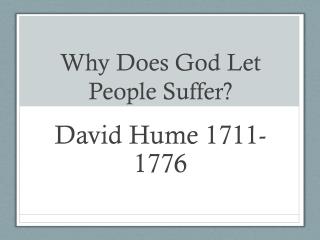 Why Does God Let People Suffer? Why Does God Let People Suffer?. David Hume 1711-1776. A God World vs. This World. “Is the World, considered in general, and as it appears to us in this life, different from what a Man or such a limited being would, beforehand , expect from a very powerful, wise, and benevolent Deity?”.

Why Does God Let People Suffer?

Lord, we pray that we may not be people of hatred or violence or lawlessness, - But people of love and wisdom and

Suffer With Me - . session 4 – tuesday (part two). suffering increases. jesus faces off with the pharisees one last

Suffer With Me - . session 1: sunday. before we begin…. the timing of the days of the week is somewhat uncertain.

Chapter 18 - . environmental hazards and human health. risk is a measure of the likelihood that you will suffer harm from

Perceiving &amp; evaluating other people - . why do we evaluate others? all of us are naïve psychologists are we

St Paul St Stephen St Peter - . what did these 3 saints suffer for the sake of christ ? what do you think made them

99% of gamers suffer from - . arrogance. - aaron cockrell. -. help the gamer community get a little nicer. instead

More than 842 million people in the world suffer from hunger and malnutrition. - In essence, hunger is the most extreme

Why WORRY about the way you LOOK… - . when there are other people in the world who…. can’t get out of bed. can’t

Syria: Negotiators talk and people still suffer - While negotiators from all sides hold difficult talks in geneva, the

Why Do Christians Suffer? - Battle cry ministry reading club presents…. bcm. the brook dried up. why do christians

Health and Weight Management - . chatpers 4-5. do real people look like this?. so what’s all the fuss about “abs/buns

Reading and Health The National Context - The need. 1 in 6 people in britain suffer from mental health problems1 in 4

Stroke: signs prevention - Stroke facts. stroke is the third leading cause of death in the united sates. in 2002, stroke

PSYCHOLOGY 8th Edition, in Modules David Myers - 2. schizophrenia. if depression is the common cold of psychological

Perceiving &amp; evaluating other people - Why do we evaluate others? all of us are naïve psychologists are we