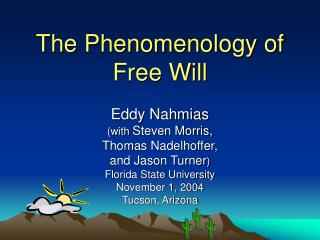 The Kingdom of Free Will - . luke 8 parables. jesus launches a kingdom. “proclaiming the kingdom of god” the

The phenomenology of ‘panic’ - . discourse and experience in survivors’ accounts of mass emergencies chris cocking

THE PHENOMENOLOGY OF THE SELF - . velimir b. popoviĆ, ph.d. jungian psychoanalyst. ego and self: terminology. w. james

THE PHENOMENOLOGY OF HUMAN MEMORY - . tulving’s “autonoetic” or “self-knowing” view schacter: remembering and

The Free-Will Problem - . appendix to chapter 9 tok ii. free-will - defined. do we truly have free will? the ability or

Free Will - . the importance of free will. human autonomy and dignity value of deliberation deserving praise and

Free Will - . what is free will?. i could have done other than i actually did. there may be good reasons for our actions,

The Free Will Defence - . discuss: imagine a parent does everything for a child. - would the parents be acting

The Free Will Defence - . augustine and irenaeus. augustine. augustine argues that it was free will that led to the

The free will defence - . peter vardy (the puzzle of evil) suggests a parable. “imagine a king falls in love with a

Free Will - . hre 4o1 unit 2. what is free will?. dictionary definition: free will (noun) power of acting independently

Phenomenology - . readings: theory text ch. 6, introduction,6:1, 6:5. phenomenology (as a study of relations between