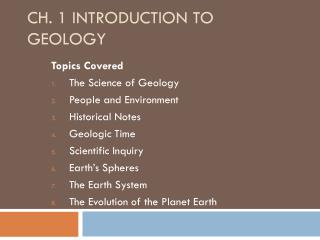 Introduction to Geology - . phil murphy p.murphy@see.leeds.ac.uk. “ civilisations are what they dig from the earth”

What is the science of geology? - These workers are drilling a hole that will be more than two kilometers deep. later

Ch. 1 Plate Tectonics Section 1 Earth’s Interior - . earth’s interior. what does a geologist do? what are the

Introduction to Earth Science 296-102 - . class 25: tour of the solar system. geology past the earth. the principles of

Chapter 1 An Introduction to Geology - . what do you already know?. age of the earth? what causes earthquakes? any in ny?

Chapter 1: An Introduction to Life on Earth - . characteristics of living things. living things are both complex and

Ch. 1.1 Earth’s Interior - . a. the science of geology. 1. geologist -- scientists studying the forces that make and

Introduction to Physical Geology - . the golden rule. treat others the way you want to be treated treat thy neighbor as

Chapter 1 Intro to Earth Science - . key i deas. earth science is the study of: geology – study of earth’s surface