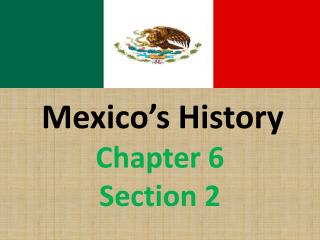 A Brief History of Mexico - . you already know the story of the aztecs and the spanish…. here’s what happened

MEXICO’S FIGHT FOR INDEPENDENCE - . post-test spanish i culture. 1. who controlled mexico when it declared its

Mexico - . colonialism &amp; independence. history of mexico is the story of the conflict between native people

Mexican History Through Murals - . tenochtitlan marketplace by diego rivera. in the mural, aztec merchants trade their

Mexican Government - . brian king and hamna fatima. federal level. mexico is a federal republic based on the constitution

Mexico History - . the aztec people and other groups such as the mayan lived in mexico before the spanish arrived. 1521