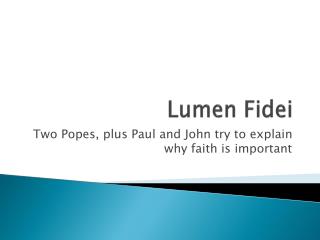 Lumen Fidei. Two Popes, plus Paul and John try to explain why faith is important. Paul says…. There are, in the end, three things that last: faith, hope and love, and the greatest of these is love. 1 Cor 13:13. Benedict’s Encyclicals. Porta Fidei - . a greater understanding of the documents of vatican ii – ‘ the great grace bestowed on the church in

Lumen Gentium - The dogmatic constitution on the

Capillary Lumen - . time is muscle: delays in symptom to door time are associated with poorer flow in the muscle

Becoming A Contagious Christian Communicating Your Faith In A Style That Fits You - . question ??? what is evangelism?

Dynasties, Conquest, and Faith - . the rise of islam. the caliph. when mohammad died unexpectedly in 632, abu bakr, one

Faith - . “in addition to this take up the shield of faith, with which you can extinguish all the flaming arrows of the

Faith, Hope, and Love - . the trinity of christian virtues. faith, hope, and love at

Faith, Hope, Love - . james 6a. love evidence. his mom love him very much, to make the boy become smarter and smarter,

Faith Ringgold - . by julieta moreyra. faith ringgold. “i became an artist for the same reason i became a writer: i

Lessons in Faith - . lessons in faith. the importance of faith. “abraham believed god and it was reckoned to him as

Passing on the Faith - . discussion. is it possible to/can you know (define first what you mean by “know”) jesus