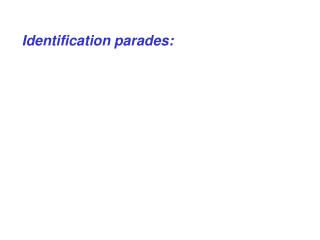 Identification parades:. Causes of miscarriages of justice:  Borchard (1932): 65 wrongful convictions. Most common causes of error: (a) mistaken identity (29, or 45%, of convictions). In only two cases did the defendant resemble the real culprit. (b) over-reliance on circumstantial evidence.

Item 7. SAMPLING AND LMOs DETECTION 7.3. IDENTIFICATION OF LMOs - . detection is required when :. by law in the country

Rock identification - . liz larosa http://www.middleschoolscience.com 2009. what type of rock is this? where or how is it

Antibody Identification - . mohammed jaber. antibody presence . presence of an antibody may be indicated by the following