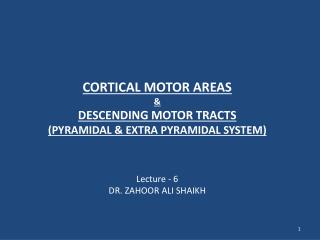 Methods and Issues in Life Span Development - . the old debate: nature vs nurture. development is both influenced by

Physiology of Motor Tracts - . dr. taha sadig ahmed,. objectives of lecture of physiology of motor tracts at the end of

Motor System I: Pyramidal Tract - . objectives . introduction origin of the pyramidal tract effects of stimulation of

Motor System - . http://www.rci.rutgers.edu/~aglass/m&amp;asyllabus.htm. question. how do you teach a one-armed man

Introduction to Motor Development - . human behavior is not compartmentalized; there is a complex system of constant,