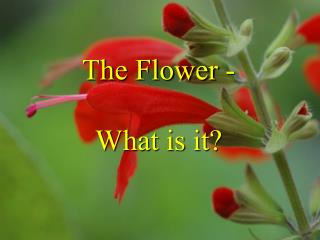 The Flower - What is it?. from Schleiden 1855. “ foliar theory ” of flower - J.W. von Goethe in “ Attempt to Interpret the Metamorphosis of Plants ” (1790). The Flower — What is it?. thus, a flower is a specialized shoot that:. is determinate (vs. indeterminate) Flower and Foliage Forms - Why are flower forms important?. each flower has a specific purpose in a designusing a variety

Hyderabad Flower Shop - Http://www.flowersbuds.com flowers are nature’s best gift to us and when you send it to others

Who Am I? - . by: michael shorb. why does a flower represent me?. my personality is colorful like a flower i grow by

Flowers - . introduction to agriculture plant science unit. flower structure. a flower develops from a bud on the stem or

PARTS OF A FLOWER - . peatal. petals - petals are brightly colored to attract insects such as bees and butterflies into

Flower Delivery Sylmar - Is one of best flower shop in sylmar, ca which provides different type of flowers bouquet for

What to Expect At the Online Flower Shops - A flower shop is something, which have all kind of flowers under a single