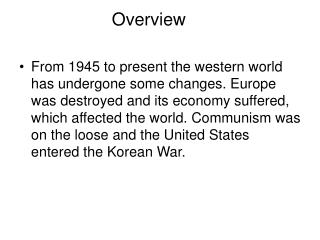 Overview . From 1945 to present the western world has undergone some changes. Europe was destroyed and its economy suffered, which affected the world. Communism was on the loose and the United States entered the Korean War. Global History II. Chapter 33.