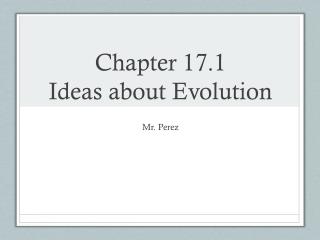 Ideas about Evolution - . chapter 6, section 1. what is a species again?. group of organisms that can produce fertile

Early ideas about evolution - Theory of evolution: a theory to explain change in a population’s genetic makeup that

Chapter 17.1 - . poisson regression. classic poisson example. n umber of deaths by horse kick, for each of 16 corps in

10.1 Early Ideas About Evolution - . what is evolution?. evolution is the process of biological change by which

10.1 Early ideas about Evolution - . evolution. what it is. what it is not. change in allele frequency of a population

17.1 1. - 17.1 1. draw the nontemplate strand of dna for the template shown below. compare and contrast its base sequence