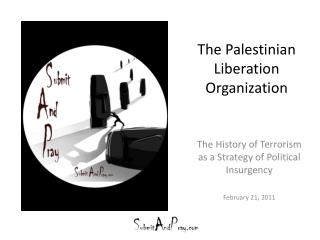 The Palestinian Liberation Organization. The History of Terrorism as a Strategy of Political Insurgency February 21, 2011. The Palestinians. Semitic and Arab Christian (6%) and Sunni Muslim 49% of the total population of Israel, the West Bank, and Gaza Palestinian Dialect of Arabic

Round 3: Arab-Israeli Conflict Since 1900 - . events, treaties, and people. theodore herzl – founder of modern

Oslo Accords - . the “epic fail” of peace treaties. the oslo accords treaty- created to settle the difference between

Israeli-Palestinian Conflict - . background. the israeli-palestinian conflict is an ongoing dispute between israel

PLO - What is plo and their purpose?. plo. plo palestinian liberation organization. definition a political and

The Palestinian Liberation Organization - . joseph benedick. founded in 1964 upon the palestine national council’s

Modern Terrorism - . terrorism. the purpose of terrorism is to instill a sense of fear in a civilian

The Arab-Israeli Conflict - . part 1. cfr crisis guide: the israeli-palestinian conflict – . why is there so much

Statehood of Palestine - . palestine as a mandate territory. balfour declaration of 1917 1920-1948 british mandate of

"Worst zoo in the world" closes - The last survivors of a gaza zoo, where dozens of animals died of starvation