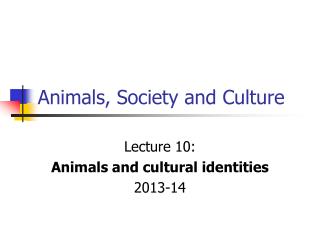 animals and science studies – humans and other animals in the laboratory Week 19 - Amy hinterberger animals, society

Society, Culture, and the Revolutionary Era - . enlightenment and the revolution. basic english government the

The Basics of Culture - . world studies. what is culture ? . culture is the ways of life shared by members of a society

CULTURE - . the values , beliefs, behavior, and material objects that, together, form a people’s way of life.

17 th Century Society and Popular Culture - . objective: students will be able to explain the changes in 17 th century

A brief account of the aims of our society &quot;Freedom for Animals&quot;. - &quot;freedom for animals“