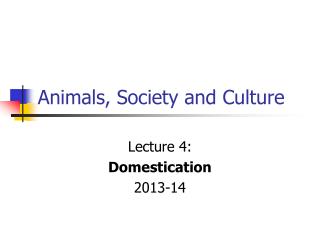 Chapter 3 - . culture. what kinds of things come to mind, when we mention the word “culture?”. can animals have

Culture - . the values, beliefs, behavior, and material objects that together form a people’s way of life. terminology.

Age and Society - . aging and society. age stratification varies from culture to culture. “being old” is master

CULTURE - . knowledge, values, customs, and physical objects that are shared by members of a society examples: art

Sociology Ch. 3 Culture - . the values, beliefs, behavior, and material objects that together form a people’s way of

Humane Society By: Shaylan Helton - . this is a photo by the humane society. to help animals find good homes and not be

CNYSPCA The Central New York Society for the Prevention of Cruelty to Animals - . by: alyssa lefebvre. history of

Culture - . remediation assignment. what is culture?. culture can best be described as a society’s “way of life.”

CHAPTER 3: Culture and Society in a Changing World - . culture : is the knowledge, language, values, customs, and