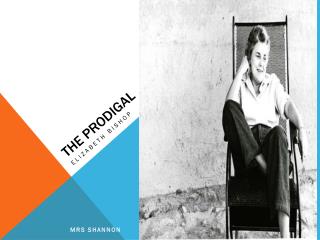 The Prodigal. Elizabeth Bishop. Stanza 1. This poem describes an alcoholic farm labourer who not only works in but sleeps in a pigsty. He is employed in a farm that is a long way from home. He is a voluntary ‘exile’ who would rather work in the pigsty than return to where he came from. . Chapter 4: Reconciliation - . the sacraments – source of our life in christ. 1. the prodigal son and the forgiveness of

The Parable of the Prodigal Son - . who was that guy? . was the prodigal son…. a non-christian? or… a wayward

Luke 15 The Parable of the Prodigal Sons - . luke 15:1-2 there were 2 kinds of people listening to this parable: people

The Prodigal - . elizabeth bishop. form. double sonnet (2 stanzas of 14 lines each) it does not conform to a regular

The Parable of the Prodigal Son - . narrated by brenten j rhone. …. jesus told them this story: “a man had two sons.

Psalm 25:21 - Prodigal son &amp; repentance. may integrity and uprightness protect me, because my hope is in you.

Definition: filled with fear - . aghast. definition: having to do with morals, values. ethical. synonym: spendthrift.

“ Unshakeable ” The Unshakeable Kingdom The Parables of Jesus - . theme verse: hebrews 12:28–29 therefore, since we