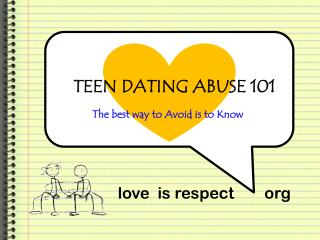 TEEN DATING ABUSE 101 . The best way to Avoid is to Know . love is respect . org. What is Dating Abuse?. Dating abuse (or Relationship Abuse): A pattern of controlling behavior that someone uses against a girlfriend or a boyfriend. The core of dating abuse is Power and Control.

The Dangers of Being a Teen in the New Millennium - . parents, this is not the childhood that you had…. things