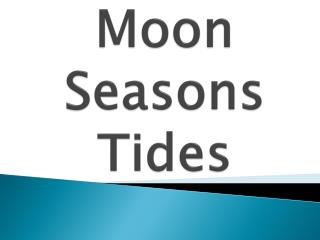 The physics of motion - . if you see the moon setting and it is full, what did the moon look like when it was on the

Weather, Climate, and Vegetation - . seasons. as the earth revolves around the sun, its 23 ½ ° angle causes much of the

Harmonic Analysis and the Prediction of Tides - . dr. russell herman mathematic and statistics

The Four Seasons - . next slide. what are