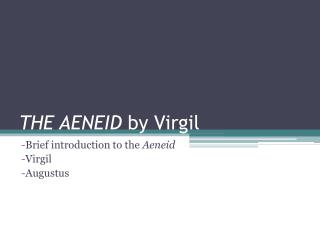 virgil and the aeneid b

from the Aeneid from Book II, The Fall of Troy by Virgil - . the mykonos vase, with one of the earliest known renditions

Virgil - . 70bce-19bce. publius vergilius maro. as is often the case, reliable biographical information is difficult to

Virgil - . and the aeneid. virgil. w ell educated; attended schools at cremona and milan s tudied with siro ,an