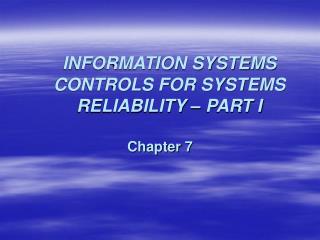 Number Systems - Part I - . cs 215 lecture # 5. motivation. the representation of numbers is made difficult because of

Designing Systems of Care for Reliability - . the content for the module is from the following: “improving the

CONTROLS SYSTEMS - . and the new freaking first controls system. basics of controls. *goes to open pdf file of the

Organizational Systems Controls - . controlling the process of establishing and implementing mechanisms to ensure that

Computer-Based Information Systems Controls - . learning objectives. describe the threats to an ais and discuss why these