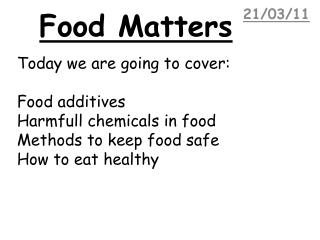 Today we are going to cover: Food additives Harmfull chemicals in food Methods to keep food safe How to eat healthy. Food Matters. 21/03/11. Food additives. There are 5 different types of food additives you need to be familiar with Why Does Smoking Point Of Any Cooking Oil Matters? - Coconut oil is a fat which immediately converts into energy instead Chapter 10 Nutrition for Health - . why nutrition matters. to make healthful food choices, you must first learn about

Chapter 18 Nutrition and Older Adults - . “nutrition is one of the major determinates of successful aging.”.

Basic Arabic Useful Phrases and Grammar Rules - . for study abroad brought to you by elusiveambitions.wordpress.com a

Why do animals prefer certain foods and locations? - If you have any questions or comments about the materials please

Why food matters: Food allergies and anaphylaxis in children - Once upon a